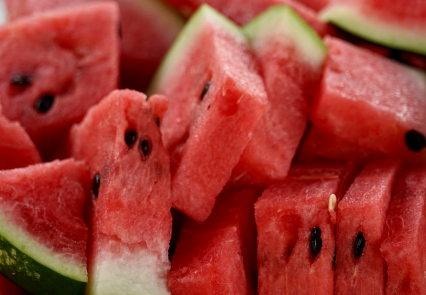 Do you know that it isn’t called watermelon for no reason? It is truly a melon like other kinds of melons but “water” was deliberately used as a prefix because the watermelon is mostly filled with water.

I want you to note that, watermelon is a healthy fruit with absolutely high water content. This water fortunately, isn’t just a mere water but one that contains vital nutrients like lycopene and vitamin C.

The watermelon is such a great fruit because they grow for only three months, specifically 80 days. They do very well in warm soils and most farmers in colder climes can’t grow watermelon unless they are able to cover the farm area with black plastic to warm up the soil.

So, it is very common to find this fruit in excess in the Northern Nigeria due to the greater effects of the sun to the soil there, as the soil is constantly warmed. Now, you may be asking why should I continue eating watermelon?

Here Are The Top 20 Awesome Health Benefits Of Eating Watermelon

Watermelon consists a lot of water and smaller amount of fiber which are a duo of extremely important elements for healthy digestion. Doctors usually warn patients with digestive issues to take a lot of water.

Some people need a lot of water but they don’t find water drinking appetizing enough because water is tasteless. So, they can only consume water when they are really thirsty.

On the other hand, watermelon is a persuader to drink water since 92 percent of it is water but this time, with a sweet taste. Hence, taking a lot of watermelon will aid digestion, functioning as water itself with more benefits.

Now, watermelon apart from being rich in water also contains fibers. So, fibers help in the embodiment and softening of the stool so that excreta can leave the body successfully.

I want to bring to your knowledge that water in it, also helps to keep your digestive tracts moving efficiently without hitches. This means that watermelon will help in the ease of bowel movements, ejecting the toxin in the body.

Do you know that people who eat enough watermelon are meant to have shiny and stable hair growth? The watermelon contains high levels of Vitamin A and C and these vitamins keep the hair strong and well attached to their base.

Now, some people usually complain of breaking hairs or uprooting hairs. They are advised to take a lot of watermelons because this helps them to keep their hair well cemented and textured to the areas where they grow from.

The vitamin C in watermelon helps your body to produce collagen which is a protein that helps to keep the skin well attached to the skeletal formation and garner a supple texture. The vitamin A in it also helps to create and repair skin cells.

So, people with dry, flaky and scaly skins lack enough vitamin A in their bodies but if they are found eating enough watermelon, there will be a lot of improvement in the outlook and texture of their skins. The Lycopene and beta-carotene supplements in watermelon too also helps in the protection of the skin from sunburns.

I want you to note that people who are into different modes of sports, watermelon is good for their health. After sports, there may be tendency of soreness in some parts of the muscles due to straining and pressing. The watermelon contains a supplement known as citrulline.

The citrulline aids the athlete to lessen the effects of strenuous sports on the muscle and probably relieve them of it. The citrulline also aids in the quicker rate of heart recovery and hence, helps athletes with the potential to improve exercise endurance and performance.

Now, the Lycopene present in the watermelon is an anti-oxidant and an anti-inflammatory compound that prevents macular degeneration from developing at all or if already gotten, from getting worse.

So, this is why people in their senectitude (sexagenarians, septuagenarians and so on) are medically and nutritiously advise to consume a lot of watermelon because this will aid their eye muscles and keep the eyes healthier in their condition of agedness.

If one studies health well, one would know that one of the most common root cause or genesis of a lot of health problems and diseases is inflammation. Lycopene and Vitamin C contained in the watermelon are anti-inflammatory compounds.

So, this means that a disease as common as Alzheimer’s disease may be delayed with its onset and given more space to be discovered and treated earlier since the Lycopene benefits brain health.

Being a very notorious cause of death worldwide, heart diseases are very common and caused mostly by high levels of cholesterol. Lycopene aids in the lowering of cholesterol levels. On the other hand, within the heart are the artery walls.

So, lycopene too aids in the reduction of the stiffness and thickness of the artery walls of the heart and thereby preventing one from heart attacks. Other vitamins in watermelon include Vitamin B6, magnesium and Potassium, all these are very good for the heart health.

Watermelon contains citrulline, an amino acid that may increase nitric oxide levels in the body. The nitric oxide helps the expansion of blood vessels which automatically lowers blood pressure.

Just like heart diseases, people also die highly of cancer around the world. The watermelon has compounds that have anti-cancer effects. Common cancers like cancer of the digestive system is prevented by the lycopene in the watermelon.

This is prevented by the lowering of insulin-like growth factor which are linked to cancer. The watermelon also contains cucurbitercin E which has been investigated for its ability to inhibit tumor growth.

11. High Level Of Nutrients And Compounds

the watermelon contains nutrients such as the Vitamins (C, A, B1, B5 and B6). It also contains potassium and magnesium.

That is not all because watermelon contains more compounds like carotenoids, lycopene and cucurbitercin. All these are very vital compounds that are required by the body for maintenance and dietary sustenance.

Do you know that watermelon is one of the thousands of fruits in the world with the lowest in calories? There are only 46 calories per cup of watermelon juice. So, it means that even low sugar fruits such as berries are nowhere near the watermelon in low calories constituency.

In our society today, people love to eat some other fruits but have been advised to reduce their intake because of the high levels of calories in them. But, this is not same for watermelon since its calories level is relatively low and safe for everyday consumption.

Drinking water is very important because it keeps the body hydrated. The watermelon is a king of water because it contains 96 percent of water.

Eating foods that have very high content of water helps hydration of which watermelon is one of the highest rated in terms of the amount of water present in it. So, eat watermelon and get hydrated like you have taken same quantity of water.

14. Protection Of The Joints

Watermelon possesses a natural reddish pigment. This pigment is made available by a compound called beta-cryptoxanthin. They are also anti-inflammatory in function.

Now, one of the major benefits of eating watermelon is the protection of the joints. So, this is why taking enough watermelon constantly will prevent one from joint diseases such as rheumatoid arthritis.

I want you to note that, the free radicals in the body which are produced by the process of metabolism. When it is inhaled into the body such as smokes and other invisible atmospheric elements can lead to the development of asthma.

So, watermelon’s anti-oxidation characteristics and presence of vitamins C prevents people from getting asthma when constantly taken.

The Choline compound that is present in the watermelon contributes to learning and memory, nervous and muscular movements, transmission of nerve impulses and early brain development.

In our society today, a lot of people conjure different health problems from eating so much food with calories and this leads to their obesity. On the other hand, it can lead into different kinds of health issues.

So, eating watermelon helps in the control of obesity. It can also control unnecessary hunger of a body that is addicted to gluttony and constantly demanding satiation. Watermelon is satisfying and stomach filling.

A lot of people need diuretic drugs so that it can help their bodies remove excess water and salt. This is most especially common among patients with kidney problems, High BP and others.

So, rather than the use of synthetic drugs to expunge these from the body, the watermelon, as a natural remedy can aid in the diuretic process and aid in the flushing of the body organs.

They also advise that once in a while, the hardcover of watermelon should be consumed alongside with it because the green coating aids the body system in a lot of ways.

A lot of fruits have their own downsides and people with conditions are advised to quit eating them. For example, ulcer patients may be warned to stop eating fruits with much acid contents like oranges, pineapples, almonds and so on.

However, eating watermelon presents no health risk for most people no matter their conditions. Even for diabetic patients, they are still free to consume prescribed amounts and not forbidden from it all through.

The watermelon is gracious a fruit and can even be served in many ways. Watermelons can be taken as juice when blended and chilled with ice cubes, serving as great refreshing and electrolyte drinks. Watermelon can also make good salad with combination of other mints, fresh mozzarella and spinach leaves. Smoothies can be made out of watermelons combined with orange juice.

Also, have you heard that you can roast the seeds of watermelon? Roast the seeds in an oven for a dozen and half of minutes to make a really tasty snack. These roasted seeds are very protein-filled and can cater for a person’s daily protein needs. However, eating watermelon WHOLE is the most appropriate way of consuming it if one were really to enjoy all its benefit.

Kachi Collins - February 4, 2023 0
Do you know that there are top 10 best real estate business in Nigeria today that you can invest into.It will interest you to...

Top 10 Reasons Why You Should Invest In Oasis And Shelters...