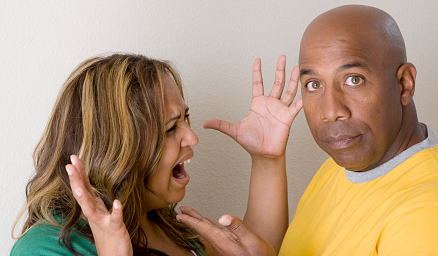 I want to start by saying that nagging means complaints on the high side. When there is continuous reminding of one old incidence or the other and persistently complaining about it over a long period of time in such a way that it begins to annoy the listener, this is called nagging.

In marriages, because of the volatile or emotional instability of women, wives are therefore the party that are usually found wanting in the area of nagging. This is why we usually hear “nagging wife” and not “nagging husband”.

Have you ever visited the bars or beer parlours to experience the melancholy of some married men who have drunk themselves to stupor and are inebriated into saying out what bothers them, complaining about the problem of going back home due to lack of peace of mind if they ever were to return home?

A lot of married men have become night crawlers, beer parlour constants and prostitutes patrons just because they prefer not to return home from work but go to places where they believe that they can have solemnness and serenity.

Men have been driven into becoming an entirely different person by virtue of the fact that they married nagging wives and they regret it every day being in the marriage.

While some couldn’t take it anymore and ended the marriage abruptly, others remain in it because of the existence of children in the marriage and keep hoping that one day, things could change for the better.

Before We Can Know The Reasons Why Most Men End Up Marrying Nagging Wives, Let Us Examine The Characteristics Of a Nagging Wife

1. She Is Not Forgiving And Forgetting

A nagging wife cannot be offended because the moment she gets offended, the incidence is recorded into her books for life.

They may claim to have forgiven when offended but at the slightest opportunity or during the process of another little misunderstanding, they begin to bring up the stories of when they were also offended even if it was years ago! They never forget, they never let go!

On the other hand, she is the boss and when anything goes happening without her knowledge or different from how she wants it done, she picks up a hot quarrel. She wants to be given every attention but can only give attention to whosoever or whatsoever she deems fit. She is the big boss!

3. She Is The Blamer

She is a gold medal winner at blame games. She doesn’t want to know why things didn’t come out the right way. She looks for who to blame even when she should be blamed for a happening.

She never takes corrections because she believes she is never wrong and the slightest move to correct her will be a line drawn for war. She is always right and that is the ideology of a nagging wife.

Repetition is one of her greatest characteristics. When she nags, she keeps repeating and repeating the same thing because she has nothing else to say but wants to continue talking! Then she loops and loops and loops, driving violently on the same point over and over again.

I want to bring to your knowledge that a nagging wife enjoys the war at home. On the other hand, she derives joy when there is no peace and when a day goes without problem, she is not satisfied. She look for the faults in the smallest things and nag up about it!

Nothing can ever satisfy her because she makes the husband feel incompetent and even impotent. She always complain about things and make it seem like it is not enough.

She compares her man with other men and make him feel he is nothing and not doing what he is supposed to be doing as a man.

She blows her own trumpet. When her husband does everything good, she hardly praise him or commend him in encouragement but the moment she does just a little thing good, she keeps singing about it and lavishing praises on herself about how excellent a wife she is and adding that most other women couldn’t do whatever she had done.

These are few signs of a nagging wife and how she makes the home a living hell for everyone. Most times, not just for her husband alone but for the children and every other person who resides in their home.

Top 10 Reasons Why Most Men End Up Marrying Nagging Wives

1. He Didn’t Do His Assignments

While men are in courtship with most women, they carry out serious scrutiny and study the woman perfectly before making move to make her a permanent house wife. Some even go to an extent of giving hidden tests just to ascertain they are not going to marry a thug of war.

Being a nag is not something a woman can hide and so, if a man were to study the woman he wishes to marry very well before proposing to her, he would be sure to know what kind of person she really is.

Some men are into marriages because of what their parents, community or culture demands. They then end up marrying some women whom they couldn’t help but be with inevitably and unfortunately for them, they met with a looming tigress.

Some men are usually carried away by the glamour and sweetness that the women they want to marry put up. Despite the signs that the woman would be a nag, their judgment senses were overshadowed.

So, they ended up being with the same woman who had shown them endless signs. They were deceived by the façade and charade of princess hood which the women portrayed.

Some of us men marry women out of some pledge we have made through oaths and circumstantial promises and must fulfil as men of our words. Such men despite knowing what kind of a nag they would marry, still went ahead with the marriage still because they had no choice and had to stand on their words.

It could be that the woman was the reason behind his success or he made a vow to her during their courtship days because he was responsible for deflowering her or for some other reasons. He then had no choice other than marrying the woman just the way she is with the premonition of condoning whatever she would bring forth.

They say no pain, no gain. Some men knew a hundred percent that this woman that they are about to marry is a super nag but they went on anyway because their marrying her accrues some gain to them of either money or property wealth.

They value the wealth much more than their peace of mind or a stable home. So they go in anyway and done really care if she is a roaring lion. Unfortunately, such women are usually the end of such men.

Some nagging wives, despite the rigorousness of their nagging character are still second to none to their husbands. They don’t mind and are ready to condone all she is till death do them part.

They are so much in love with the woman and will continue to tolerate all she is so much that they now see nagging as a normal thing and are not too bothered by this.

Yes, it sounds crazy but there are men who are turned on by the nagging of a woman and deliberately marries a woman because she is a good nag! There are men who cannot experience sexual pleasures except through the hard ways.

Some men have been reported not to be able to have sexual intercourse with their wives unless she is angered! We don’t know if this is a condition of being a maniac but it turns some men on and are so delighted to marry a nag.

Some men end up marrying nagging wives because what they saw and wanted in the woman were just her physical characteristics. They were interested in her for who she is and not what she is.

Maybe she was a perfect figure eight or perhaps, the beauty was so enchanting. They became blind to the signs and went on to marry the nag. Eyes get open only after she has been married.

A nagging woman to some men is the ideal normal woman. They smile when the woman nags and just shake their head and say “women, they never change”. They don’t believe that a woman can exist without being constant headache to her husband.

So, whether they are about to marry a nagging woman or not, they are less concerned. They can dance to the tune and are still pleased with it.

10. Societal Status Of The Woman

Why do you think some men can give anything to marry a superstar, a renowned model, a successful musician or the famous daughter of a wealthy man? They don’t want to know what the woman is.

Who she is matters most to them and whether she is a nag or an imbecile, they don’t mind. Being the husband of a popular woman is what rocks their world.

In our society today, most men end up marrying nagging wives. A nagging wife might not be totally ruthless and void of joy in the home but then nagging plays a huge part in breaking down marriages or stagnating the flow of essence in marriages.

They say that “a good wife is a good life” and so, no matter how good a woman is, when she begins to nag, it decays the joy of the home.

There are so many other reasons why men end up marrying nagging women but these are the most common ones above and hence, whenever you see a man end up with a nag as a wife, he most probably is in one of the above categories.

10 Things To Do To Make Your Girl Love You Forever

Kachi Collins - January 14, 2022 1
Do you know that there are powerful ways to make good money in real estate business in Nigeria?I want to bring to your knowledge...

Proven Tips On How To Make Money On Snail Farming Business...